During May I travelled on the Rocky Mountaineer, the luxury train that runs on four different routes in western Canada. I was aboard for the First Passage to the West, the scenic route between Vancouver, in British Columbia, and Banff, in the neighbouring province of Alberta. The skyline of Vancouver. The high-rise buildings are seen from across Devonian Harbour.

Staying in Vancouver, at the Fairmont Hotel Vancouver, provided an opportunity to explore the most populous city in British Columbia. Depiction of a First Nations’ chief on the facade of the Fairmont Vancouver Hotel, which was opened in 1939 by King George VI and Queen Elizabeth (the Queen Mother).

I thought it was fascinating to watch the float planes landing and taking off in the harbour, a short stroll from the hotel. A whisky sour cocktail made with maple syrup, developed to celebrate Canada’s 150th birthday and served at Notch 8, at the Fairmont Hotel Vancouver.

Later during my first full day in the city I boarded a Zodiac boat, at Sewell’s Marina, for a sea safari of the Howe Sound. Sightings included a bald eagle and a harbour porpoise, plus a multitude of seabirds. A walk in Stanley Park provided some outstanding views of the Vancouver skyline and an opportunity to visit the totem poles, carved by several of the First Nations of western Canada. Thunderbird house post among the totem poles at Brockton Point in Stanley Park in Vancouver.

I travelled in one of the bi-level GoldLeaf carriages, whose dome windows provide panoramic views. Bagpiper by the Rocky Mountaineer at its station in Vancouver.

Even with my long legs I had plenty of room to stretch out in the reclining leather seats, though I did keep heading down to the open vestibule to photograph. A bald eagle (Haliaeetus leucocephalus) glides over the Fraser River in British Columbia.

The first European settlers were attracted to the area around the Fraser and Thompson Rivers because of gold, and used to pan by their banks.

A walking tour of Kamloops, after the first day aboard the train, provided insights into the heritage of the city and opportunities to try some of the region’s food and drink. Go on, try a cookie! One of the people behind the walking tours of Kamloops.

Eating and drinking on the train

That said, the food served aboard the Rocky Mountaineer is both delicious and plentiful. Executive chef Jean-Pierre Guerin took the time to explain some of the challenges his team face in cooking in a moving galley kitchen. Their creations are served in the dining carriage on the lower-level of the train. Members of the guest experience team and the train manager Zebulon Fastabend took time to explain the intricacies of their roles to me, meaning I left the train at Banff with a far greater understanding of how the Rocky Mountaineer operated. Zebulon Fastabend, the train manager, aboard the Rocky Mountaineer.

Along the way we spotted a male grizzly by the side of the track, an experience I wrote about for National Geographic Traveller 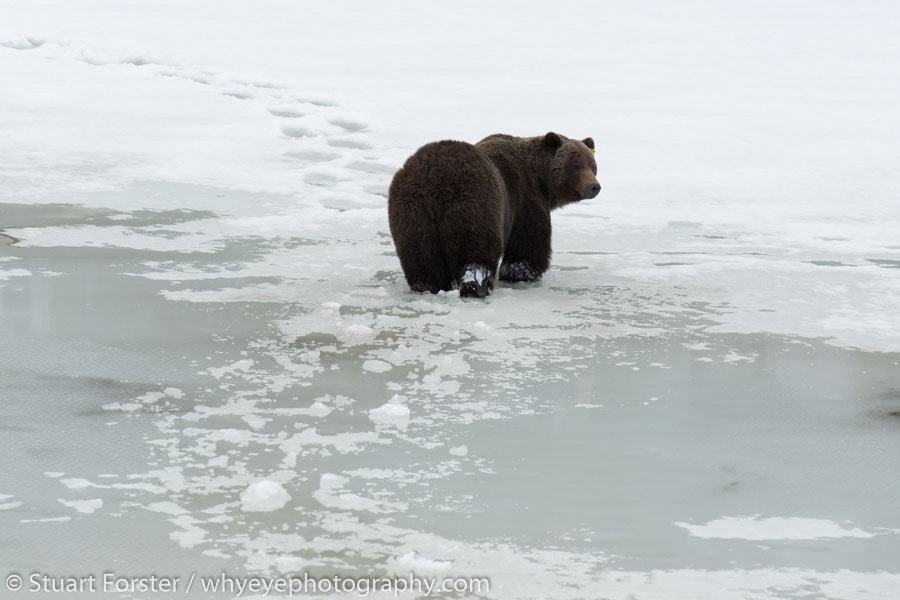 The landscapes of the Canadian Rockies were gorgeous and I enjoyed the opportunity to visit Lake Louise, which was still frozen, and to take a ride in the Banff Gondola to take a look down over the beautiful town of Banff. Woman in a Canada cardigan on Lake Louise in Alberta. The area around the lake is one of Canada’s most popular ski resorts.

The gourmet tasting menu at the Rimrock Resort Hotel’s Eden Restaurant was served in a dining room with spectacular views over the Banff National Park, which is Canada’s oldest. Seared scallops served with saffron garlic puree, a Hollandaise sauce and Edameme at the Eden Restaurant.

Would I recommend riding the Rocky Mountaineer? Absolutely. And ensure you pack plenty of memory cards! A woman photographs from the Rocky Mountaineer in Alberta. (If you enjoy reading blogs check out Kelly Stillwell’s ‘Fun, Food & Faraway Places’ under www.kellystilwell.com.)

Take a look at the Rocky Mountaineer website for more information about routes and the availability of packages. A woman photographs from a glass-domed GoldLeaf class carriage on the Rocky Mountaineer train while passing Hell’s Gate.

Find out more about western Canada via the Hello BC and Travel Alberta websites. The town of Banff. The Fairmont Banff Springs Hotel stands next to Tunnel Mountain.

The Destination Canada website also has a wealth of information about the region.

Enjoy this post about photography on the Rocky Mountaineer in western Canada? See this article about Brookgreen Gardens in South Carolina. Dusk over the Canadian Rockies in Banff National Park.

If you like what you see and want to commission travel photography please contact Why Eye Photography. You can purchase images or commission a shoot. Use Pinterest? Pin this and return to the whyeyephotography.com blog post about photography on the Rocky Mountaineer luxury train in western Canada.