Stuart Forster visits the Germany Travel Mart in Wiesbaden and takes the opportunity to photograph at the event and in the host city.

The 45th Germany Travel Mart, known widely as the GTM, was held in Wiesbaden from 12 to 14 May 2019. The annual event brings together members of the travel industry to showcase tourism-related products from across Germany — including tourist attractions, hotels and destinations.

Disclosure: Stuart was hosted in Wiesbaden by the German National Tourism Organisation, which has not reviewed or approved this article.

The 2019 edition was the third time that Wiesbaden, the state capital of Hesse, has hosted the GTM. The state-of-the-art convention centre was opened in April 2018. Shadow and light interplay at the RheinMain Congress Center (RMCC).

The building was designed by Ferdinand Heide Architekt BDA, an architectural company which is based in nearby Frankfurt am Main. Staircase at the RheinMain Congress Center (RMCC) in Wiesbaden.

It takes less than 45 minutes to travel on local transport, known as the S-Bahn, from Frankfurt International Airport to Wiesbaden. As part of efforts to minimise the environmental impact of the GTM, passes presented to delegates included the use of public transport in and around Wiesbaden. The Kurhaus in Wiesbaden.

During the press conference Petra Hedorfer, the Chief Executive Officer of the GNTB, presented Germany’s 2018 tourism results. Journalists gathered from 51 countries heard that the total number of overnight stays in Germany by foreign visitors had increased for the ninth year in succession. The 2019 Germany Travel Mart was declared open during a gala event at Wiesbaden’s Kurhaus. The predecessor of the grand building housed a spa in which royalty and influential members of society gathered. The current building, erected during the first decade of the 20th century, serves as a venue for social gatherings and is the location of Wiesbaden’s casino. An evening at Eberbach Abbey

Delegates attending the 45th GTM were invited to an evening event at Eberbach Abbey, a former Cistercian monastery in the Rheingau. The region is renowned for its quality Riesling wines and the abbey has been the location of the Steinberg vineyard for almost 800 years. The abbey’s atmospheric vaulted cellars hold wooden barrels used for maturing wine and were illuminated by candlelight as delegates from the GTM visited. Hessen Tourismus, the organisation that promotes tourism to the state of Hesse, used the evening to showcase the region’s culinary heritage and tourism attractions. That meant opportunities to taste food and drink and chat to representatives from towns and cities from across the state. Delegates danced to rock and pop music performed on a state inside the abbey’s courtyard. The evening closed with a choral recital inside of the deconsecrated abbey church. The building’s grand arches and colourful lighting helped create an impressive setting for the performance. 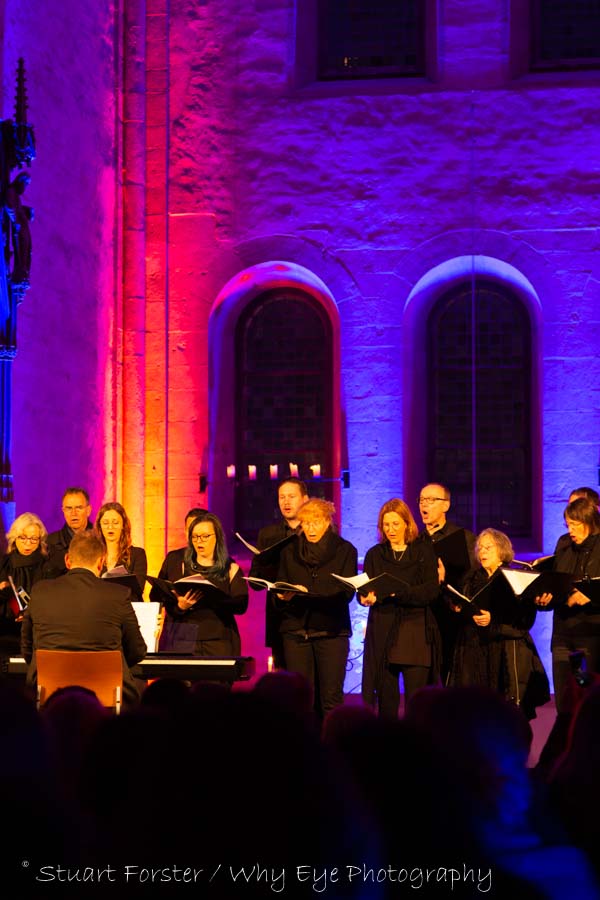 Choir singing in the former church at Eberbach Abbey.

The acoustics of the former church ensured that the voices of the singers carried and are one of the reasons why Eberbach Abbey is one of the venues of the annual Rheingau Musik Festival. Images by Why Eye Photography

Photographs illustrating this article are by Stuart Forster.

Stuart speaks fluent German and is available for assignments in German-speaking countries.

He has experience of photographing on commission for travel, lifestyle and trade magazines.

Enjoy this post? Check out this article with photography of the Rocky Mountaineer in western Canada. Use Pinterest? Pin this and return to the whyeyephotography.com blog post with photography from the Germany Travel Mart in Wiesbaden, Germany.